Eurostat has measured a particular element of happiness in cities… the satisfaction with culture. And the results for culturally rich Mediterranean cities is appalling. Can we find a “smart” solution and innovate around culture?

which I would like to overlay on top of the answers given by Europeans to satisfaction with life in the their capital cities. 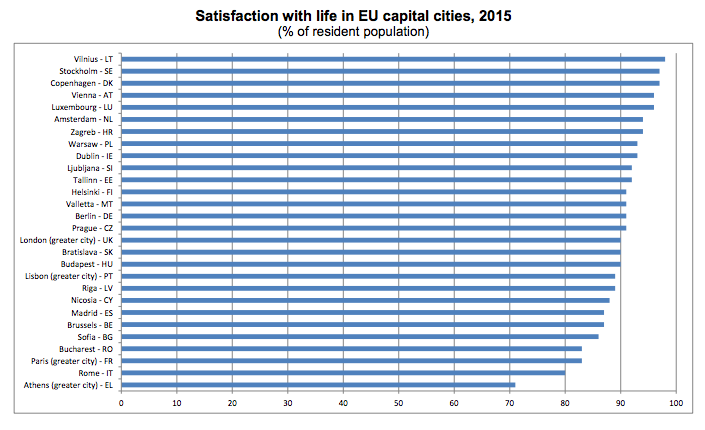 [Link to source for the Satisfaction index]

Europe’s urban regions house three-fourth’s of our population and generate more than half (53%) the EU’s GDP. So the market for culture in the cities exists.

Culture can be a lacuna to be filled by “smartness” in as much as other things like transport and energy, which so many cities focus on. Not in an Europeana manner which already exhibits online over 50 million pieces of artworks, artefacts, books, videos and sounds from across Europe. But in a way as to tickle more of people’s satisfactory realisations from culture, and in a communal manner. Because that is what cities are – they are urban communities. How can we join “social” and “culture”? Is it possible that this can raise the quality of the discussion content happening online?

When I lead social media workshops, I like to say that a successful campaign marries the online engagement with the physical world. Engages online, rewards tangibly. And this can be the starting point for improving cities’ ratings on satisfaction with culture.

Recently, for example, the Musée du Louvre “hid” the internationally recognised glass pyramid by wrapping it with a street art of what usually lies behind it. This action caused conversation and thus online engagement about the Louvre.

Engagement promotes a human story of discovery, which tantalises others to follow and do more. It brings the spotlight on culture, and thus commercial interest around the concert halls, theatres, museums and libraries which are aching for funding for productions, renewal and reaching out. A date can also be at a concert or a theatre, families and friends should can find it cool to meet at museums, and libraries can be beyond books and more about spaces for literary interpretation.

The chicken and egg (of do we invest first, or later?) can be solved by Facebook: the most-widely used online social platform. It is indeed an opportunity for the company, and not only as corporate social responsibility, but also as the tool for a new form of culturally rich enjoyment. The challenge is on: which city can engage (with) Facebook first?