Some magazines in Kindle-format are only sold by Amazon. You’d be technically correct to say that’s monopoly. But you can also get the publications in .mobi or .pub formats from download sites on the Internet. They’re counterfeit and illegal and so I don’t use them or promote them. But, admittedly this is a black-market which is promoted by what’s probably an irregular commercial distribution of digital content. 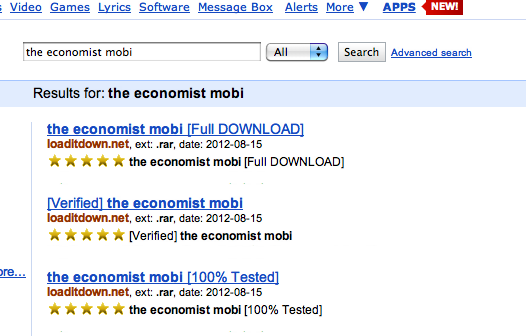 The opportunity for illegal downloads to become popular even among normally law-abiding people is also brought about by an additional constraint. Somebody somewhere decided that even if they have the magazine, they just won’t sell it to you because you’re from a different country! Are you calling that racist now?

You’d think that it’s the publishing house that does not want to sell it to you.

But The Economist website allows you to subscribe to the digital copy in all formats, except for the Kindle. That’s only available from Amazon! I then also checked the Time website – they admittedly provide a digital subscription for the Kindle Fire (but probably because it reads the same format as the Apple iPad). The formats readable by the more common liquid-ink Kindles are only legally available from Amazon. Agggrrrgh! 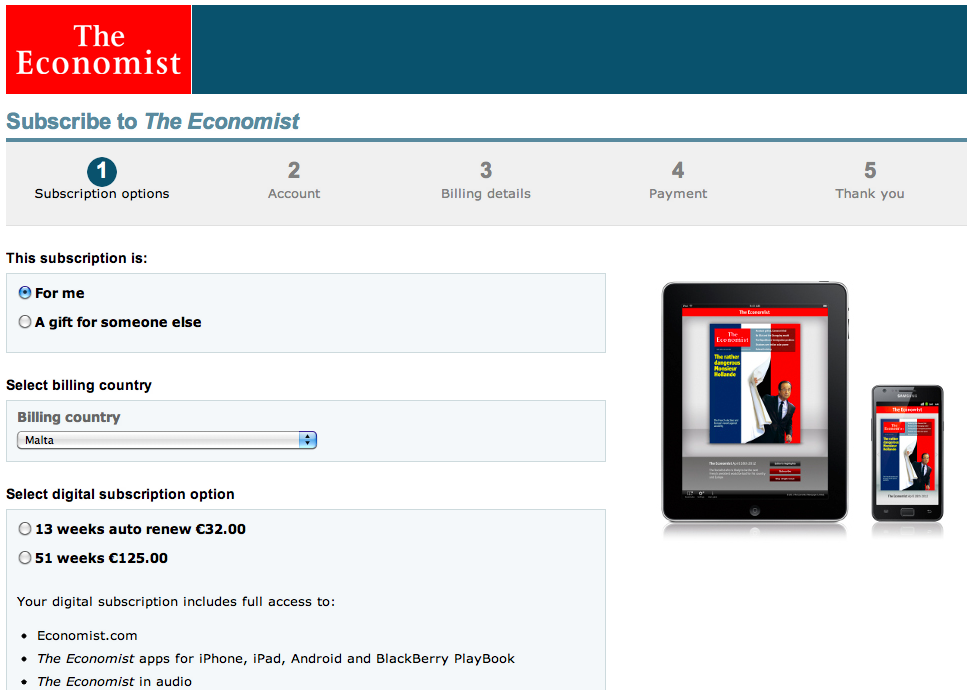 At an EU-level it’s a recognised issue with the digital single market. The jargon means that even if you’re meant to enjoy free movement of goods and services across EU borders (and so, buy things from any EU country without legal or administrative obstacle), that still is not fully practicable when you buy online. Read more about the Digital Single Market here.

And if you’re thinking that this is only an Amazon problem, you’re mistaken. Apple only opened iTunes to the whole of the EU in September 2011. I remember it making the news: “Apple launches iTunes Store in all remaining EU countries” and “iTunes store now available in Malta“.

The market is starting to budge. Let’s make it happen by raising our voices and putting the pressure as consumers.

Back in November, I blogged about the Citizen Initiative — a concept entrenched in the Lisbon Treaty. I am interested in this because of its direct relevance to the world of open governance. Open governments are transparent, and invite collaboration and participation. I believe that the initiative is about making all of that possible in the EU — by creating a direct link between citizens and the institutions where it is so needed that 1 million such citizens demand it!

Beautiful.. but how will it work? And will it? Simon Busuttil, one of Malta’s MEPs wrote in The Times of Malta today and gave some insight to answer the first question. I still would like to see more people comment on how this initiaitive will exist in a world that always gives more space to the social media. Will the EU lag behind the US? Will we continue to ignore social media?

Andrea DiMaio’s latest blogpost is critical about how much the various federal agencies in the US are being succesful in adopting the spirit of the Open Government Directive.  Different authors have given different interpretations to the motivations behind “openness” in governance, but the US directive captures it all and builds upon the three fundamental pillars of transparency, participation and collaboration.

The application of the concept of open innovation is to be applauded. Companies like Google do not only create products for use on the Web, but also live by the Enterprise 2.0 culture. Google Labs showcases a part of the company’s research portfolio while it is still at prototype stage. The company uses this method to attract feedback that would help improve the product’s usability. The open approach has also been taken by the European Commission in its Living Labs project. The idea behind the labs network is to develop a ‘beta-culture’ which engages users’ creativity through their participation in the R&D and Innovation life-cycle. The concept of open innovation offers benefits to all actors in the system, allowing users to feel empowered to influence product development and companies/institutions a larger and live test-base for validating and integrating innovation.

Back to Washington’s Open Government Directive…

Each federal agency had until the 6th February to implement an online Open Government page and many have done so using a free public dialog tool developed by the GSA. The tool allows users to submit ideas and others to deliberate on whether or not they agree — thus raising the “popularity”  of the submission. OpenGov Tracker was launched just a few weeks ago. It allows the public to be informed from one dashboard about the interest being generated in the Open Government concept.

Veteran Affairs and NASA rank at the top by attracting 124 and 121 ideas, from 79 and 71 authors, respectively. They are followed closely by EPA which clocked 96 ideas from 76 authors. My first observation is the relatively low takeup of this system (compare with Facebook).

Andrea DiMaio made another interesting observation: a particular user has submitted the same idea of webcasting all meetings to a large number of federal agencies’ ideas collection system. This same idea ranked as the most popular idea in 20 of the 21 IdeaScales that DiMaio surveyed. The data collection using GSA’s IdeaScales is based on the usage of this electronic tool which, as already highlighted above, is far from representative of the population of the United States. But bearing this constraint in mind, DiMaio’s observations remain very valid and as he rightly points out:

While Governments are relatively late-comers into the arena of open innovation, it is encouraging to note how its adoption is felt to be directly associated with the process of democratisation.

I started writing this post just after reading the Facebook message from Marc Zuckerberg (the founder). Then I had to save it in draft and return to it today… It may be slightly passe` but I still wanted to share this thought!

Facebook runs into its fifth year of existence with a network of 350 million users. That is almost as big as the voting population for elections of the European Parliament in 2009. The biggest difference however, is that this collection of people has a voice that can speak up without needing a middleman. Facebook was 300 million users just two and a half months earlier. Even if its growth rate seems to have slighlty slowed down, it will be as big as the voting population for the European Parliament in a matter of months.

And yet, the June 2009 elections are probably the largest trans-national democratic vote ever made possible in recorded history — at least according to the BBC’s Q&As. The most important statistic however is the new record low turnout for these elections: one which brought less than half of the eligible 375 million persons to the polls. This can and should be compared by those at the helms of politics worldwide with the active participation in the Facebook network. As I write this post, and according to the official Facebook statistics:

The European Parliament Digital Trends report drawn by Fleishman Hillard shows a staggering reality of 62% of MEPs who had never heard about Twitter, even if 75% of them have a website! Only 24% use a blog, and only a quarter (26%) of these blogging MEPs, actually comment on blogs other than their own! This reminded me of one of the quotes that were running on a big screen at the eGovernment Conference in Sweden… A website is so dot-com, get a platform! (author cannot be credited because I can’t remember who it was!) This is so true and, yet so unappreciated.

The most active online users have gotten away from websites and are participating in the creation of rich content. The significance of social media is not in being online but in having an active participatory role. Fleishman Hillard’s report concludes that “Members of the European Parliament (MEPs) recognize that EU citizens go online and that they therefore need a web presence. However, the majority of MEPs do not currently take full advantage of social media tools as a means to engage with voters and drive them to their websites.”

I checked the realtime stats on Europatweets whilst writing this post and just over 60 hashed tweets had been recorded in the last 24 hours.

The convergence of media on to the Internet is changing the social landscape by the minute and it is good to note that there is awareness of this amongst politicians. But what has been achieved in Europe to date has not even scraped the surface!

The Lisbon Treaty’s coming into force on 1st December will establish a clear democratic right for European citizens to put forward policy proposals to the European Commission. The principle has been termed the Citizen Initiative and is as yet only broadly defined in the treaty.

The procedures and conditions required for the receipt of citizen initiatives will be determined by a Regulation to be adopted by both Parliament and Council upon a proposal of the Commission. To this end, the European Commission has launched a public consultation to help define what it calls the “practical details” of how a million citizens hailing from a representative number of EU countries could come forth with such initiatives.  The consultation is supported by a Green Paper (published on the 11 November) which promises to identify practical questions. Input is welcome until the end of January 2010.

Margot Wallström, Vice-President of the European Commission in charge of Inter-institutional Relations and Communication Strategy, stressed that “the participation of the citizens in decision-making is indispensable for democracy”.

eParticipation (and the role of the social media in this) is surely a practical concern not to be underestimated! Will an initiative put forward by a million Facebook members from a “significant number of member states” be considered? How will the Commission know that they effectively are individual nationals of the Member States (eAuthentication)? Will their having logged into Facebook and joined the “Cause” constitute an electronic signature to the petition for the initiative (eSignatures)? Will a million active Facebookers be able to determine the agenda of what the Commission proposes? Or will we forget all about the “e” and succumb to ole pen ‘n paper?