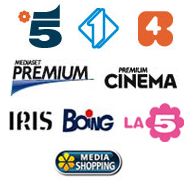 TV in Italy was born in 1954, under a Christian Democrat government which led Italy between the post-WW2 years and the days of Mani Pulite (clean hands). Mani Pulite were the investigations that ran between 1992 and 1996, exposing the super-corruption nicknamed Tangentopoli (bribesville). The investigations exposed politicians from the main parties. The Christian Democrats (DC) ran Italy between 1943 and 1992 with only one major break — that between 1983 -87 when Craxi’s socialists (PSI) took power. Both Craxi and former DC prime minister Andreotti were later investigated.
TV has always been used by the party in power. Everybody in Italy understands the propagandist powers that the box in everybody’s living room and kitchen has. In 2005, Ambeyi Ligabo a UN expert on press freedom stated in his report on the freedom of opinion and expression in Italy, that “the public television network Rai has been strongly politicized since its creation in 1954. At the time and until the major political changes of the end of the 1980s, Italian public television was controlled by the political party in power, the Christian Democrats”.

The state-owned company Rai was the only one to hold a license to broadcast TV channels nationally. So much that when, in 1984 Fininvest acquired Rete 4 and Italia 1, Italian courts ruled that the acquisition was in breach of Rai’s right to a monopoly of simulataneous national broadcast. The courts ordered them to close doors. Craxi then rescued the situation with what many considered a rash decree which saved the Fininvest group. But that also ensured that Rai would stop being dominant.

Are people wrong when they think that Berlusconi controls the media through his holding company: Fininvest’s share in the Mediaset group? Fininvest does not have a controlling share in Mediaset: the above chart shows it was less than 40% in Dec. 2009. In 2005 Berlusconi sold 20% of Mediaset to Kirch (10%), South African businessman Johann Rupert and the Saudi Prince Al Waleed Bin Talaal. In 1996 he continued to sell shares and relinquished control.  Today Berlusconi is an ordinary shareholder with his children Pier Silvio and Marina occupying the posts of deputy chaiman and director on the Board respectively.

I am not drawing any conclusions. These are the facts and the rest is opinion which anybody can liberally use the media to share with whoever cares to listen.

One thought on “Mediaset and the freedom of TV in Italy”